How to use Joplin desktop app on FreeBSD

This is a quick note on how I build and use the latest Joplin desktop app on FreeBSD.

For my initial exploration of Joplin on FreeBSD, please refer to the previous post.

The current target version of this article is Joplin Electron release v1.0.185 (Feb 2020). 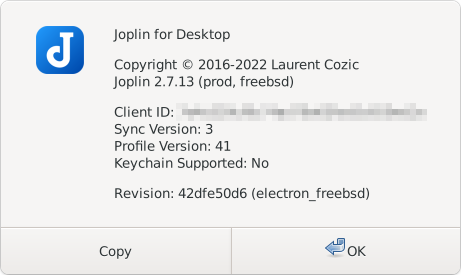 I take the following steps to build Joplin desktop on my FreeBSD 12.1-RELEASE system (with XFCE4 desktop).

Workaround for LSEP showing up in CJK input methods

NOTE: This is not FreeBSD-specific. But anyway, I wrote it down here for future reference.

This issue was reported several times as below.

As pointed out in the issue #1500, it looks like unfixable as it might be an Ace Editor issue.
But for users who have to use some “input method” for entering text, it is really annoying.

Fortunately, this issue can be worked around by using a special font which has only a single zero-width glyph for the weird character (U+2028 Line Separator).