Testing Joplin (Terminal and Desktop) and Web Clipper on FreeBSD

TL;DR (2020-01-15)
This article describes my initial exploration of Joplin in June 2019. It’s not intended to be a tutorial/howto and it’s not necessarily up to date.
Please refer to the newer post for more up-to-date and concise description on how to use Joplin on FreeBSD.

Looking at the sorted note list on its web application, I found my first note had a date of 2011-04-24 and it was about Android browser’s local file handling. That was exactly when I bought my first smartphone and played with Android 2.x on it, I remember.

Since then, the number of notes has grown up to around 20000 and without doubt, it had been one of the most frequently used applications along with web browsers, email clients and UNIX tools such as shells, ssh, rsync and vim … until last week.

There might be something wrong with the recent update of Android app. It suddenly became draggingly slow and began draining battery all the time. My phone got unusually hot, so I had no other choice than to uninstall it and start looking for alternatives.

To be clear, the app for Windows and Web continue to work fine.
But as my daily usecase of Evernote is as follows along with the fact that “Evernote for Web” cannot be used on Android browsers, I effectively lost access to my notes on mobile environments. That’s a really huge problem.

That is where Joplin comes in.
It’s an open source note-taking application which supports multiple platforms and it has been drawing my interest for a while (according to my note I first heard about it on December 2017).

While an update is still not available for Evernote Android app, I decided to try out Joplin on Android, Windows, Linux … and FreeBSD, my favorite operating system.

As this blog title has ‘BSD’, I will focus on installing Joplin on FreeBSD environments in thie article.
I’m not going to explain how to configure hosts, apps and a sync target (WebDAV server in my case) here.
They may or may not be in another article.

Which Types of Applications to Use?

According to the Joplin website, three types of applications are available and each one supports the following platforms.

At first glance, none of them seem to support FreeBSD.
Building the Electron-based desktop app on FreeBSD looks very hard to me, though I recently heard about the progress of Electron on FreeBSD.

There are also the following add-on and third-party tools.

Basically all of them require the desktop app running on the same host because they interact with the API service provided by the desktop app.
But it seems possible to use the terminal app instead if it’s build with experimental support code. So I will try them later, too.

There’s two ways to install the app.
One is to install it with npm (Node Package Manager) and the other is to build it from its source code.

This is the easiest way to install and run the plain Joplin terminal application.

Basically, I just have to follow the instructions in “Terminal application” / “Linux or Windows (via WSL)” section on the Joplin website.

Build the App from Source

If you want to modify or use experimental branch of the terminal application, this is the way to go.

Basically, you can follow the steps described in “Linux and Windows (WSL) dependencies”, “Building the tools” and “Building the Terminal application” sections on the Build instruction page.

It’s easy to install it on supported browsers, i.e. Chrome and Firefox. Just search “Joplin Web Clipper” on Chrome Web Store or Firefox’s Add-ons Manager page and add it to the browser.

Whenever you want to clip(save) a web page you are currently visiting, just click “J” icon, select how/what/where to clip and click “Confirm”.

But on FreeBSD you may get an error like “Could not find clipper service”.

As I mentioned earlier, Web Clipper API service must be running on the same host as the browser. But the service can be only provided by the desktop application, which I cannot build on FreeBSD (yet). So what can I do?

Fortunately, there was already a discussion on Joplin Forum about implementing API service on the terminal app and there is also an experimental ‘headless-server’ branch in the repository.

That information made me try to build the terminal app with API server functionality.

This is really a quick and dirty solution just for me and I will never recommend it to anyone else.

But anyway, I wanted to use Web Clipper on FreeBSD (and I also want to use Joplin behind a HTTP proxy) so I forked Joplin repo on GitHub and created a personal branch ‘headless_proxy’ from master, where I merged upstream’s headless-server and proxy_test branches with some dirty modifications to avoid a few issues I encountered.

Installation steps are exactly the same as Build the Terminal App from Source except the github repository to clone and the branch to use.

So please refer to the section and replace the step 2 with the following command lines.

This custom terminal app can be run the same as the original one.

To stop the service, run the following command in the app or exit the app.

The service can be also run without UI by running the following command on shell prompt.

Now I can use Web Clipper extension on FreeBSD! 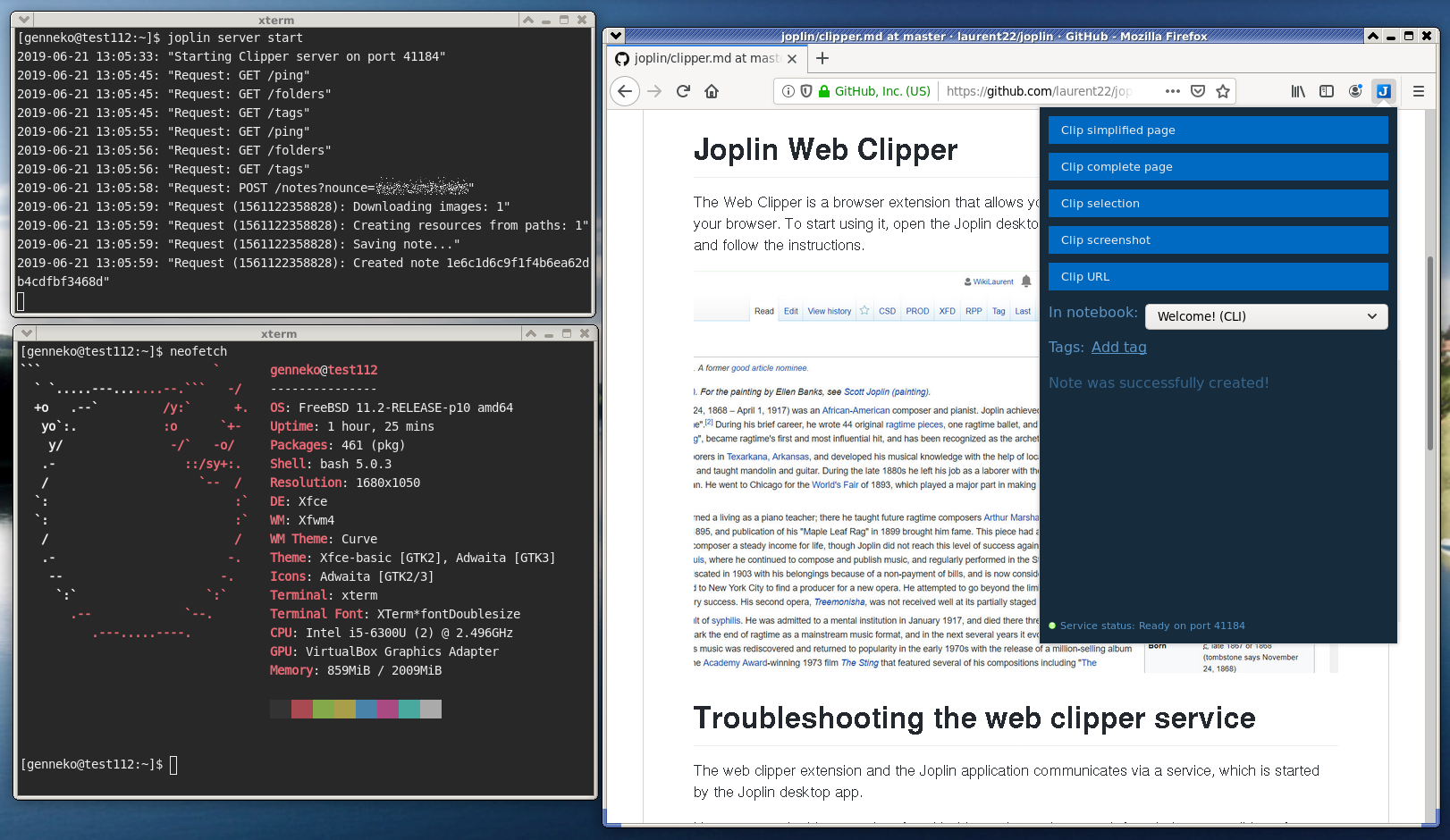 After successfully building the terminal app, I realized that Electron was added to FreeBSD ports tree as devel/electron4 last month. So finally, I tried to run the Electron-based desktop application on FreeBSD with it.

Because I’m not familiar with Electron at all, the following steps are just what I did to run the app and they might not be the right way. But I wrote them as a record anyway.

Because I’ve been mainly using Evernote on its Web application, it is really nice to have a web UI for Joplin too.

Once again fortunately, there’s a nice third-party web frontend Joplin Web on GitHub. Although it looks like a WIP/experimental project, I gave it a try.

For example, you can get a list of notebooks by using the following command line.
(jq is a powerful command-line JSON processor and can be installed from package)

I first thought that I could possibly write yet another CLI client in /bin/sh but then I found that there’s a very handy perl module to access the API.

Here are the steps I took to install and get a feel of it.